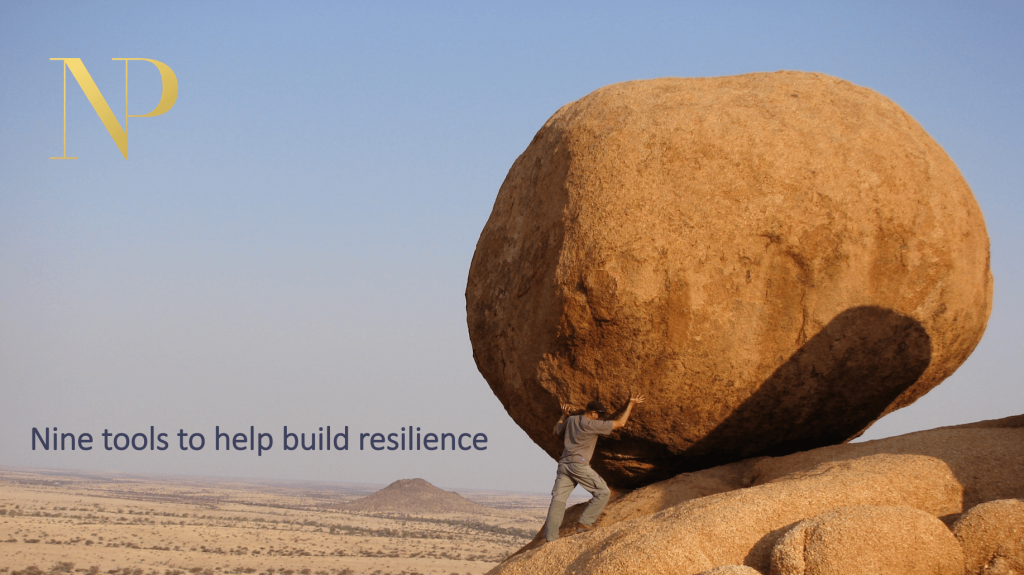 Conflict is inevitable. Conflict prevention and resolution depend on complex attributes and characteristics of the peacemaker, the mediator, the conflict, the environment, and factors which lie outside anyone’s ability to predict or control.  While detecting and preventing conflict from escalating to resolve it at an early stage is critical, we know that the surrounding environment plays an important role in helping to aggravate conflict or to dampen it down. We have learnt that there are actions that can support leaders and managers to manage and to recover from conflict. Those actions are linked to a recovery period where you strategically stop to recharge.

When we experience adversity, such as a disaster or trauma or conflict or failure in our personal or working lives, we tend to first react with a range of negative emotions. When I became a headteacher, I had to confront adversity and frustration daily, mainly as I took over. I felt like every day was a battle. I hired an executive and leadership coach, Linley Rose. She didn’t give me advice. She just asked me, “What opportunity is that giving you?” after I had described a particular situation, and I just couldn’t see the light out of the end of the tunnel. I was exhausted and drained; I didn’t see opportunities at all. She repeated the question, and I had an aha moment. I realized that it could be an opportunity for me to grow, to test my ability to not only survive but also to thrive. 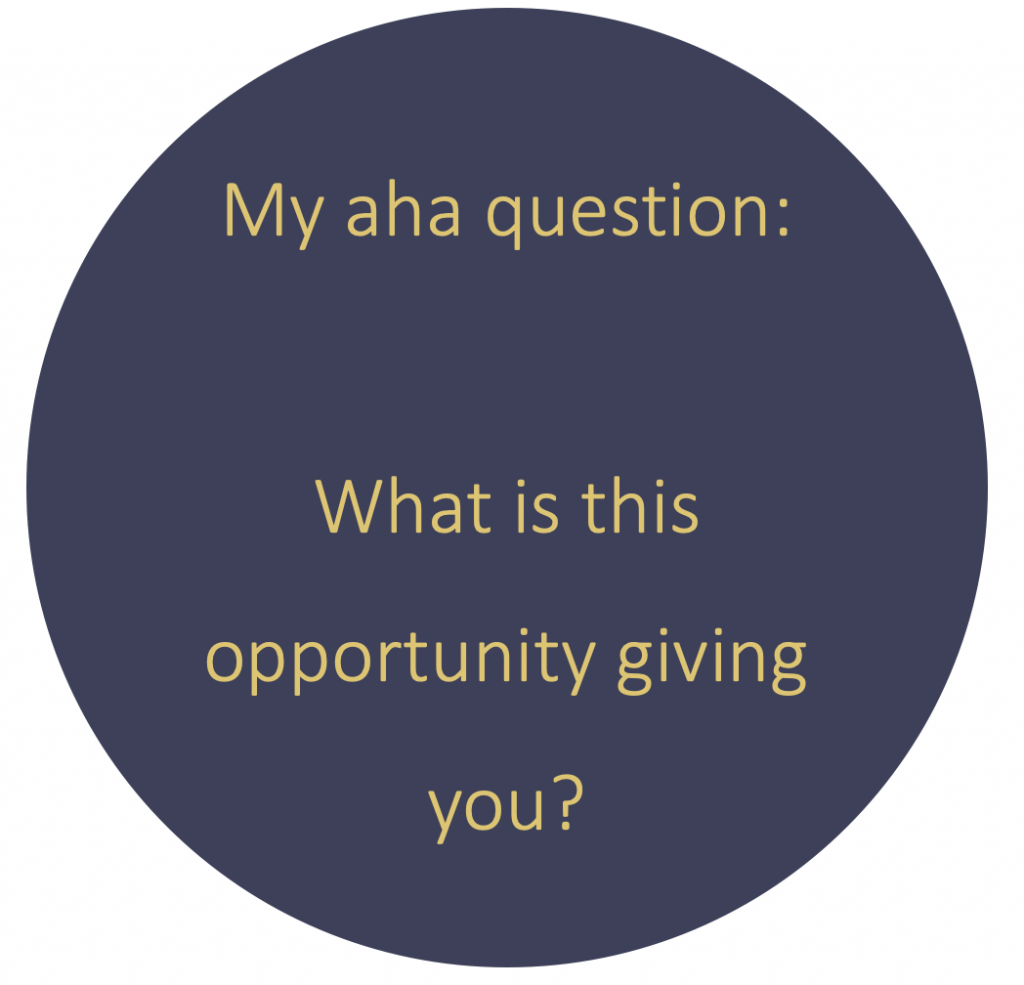 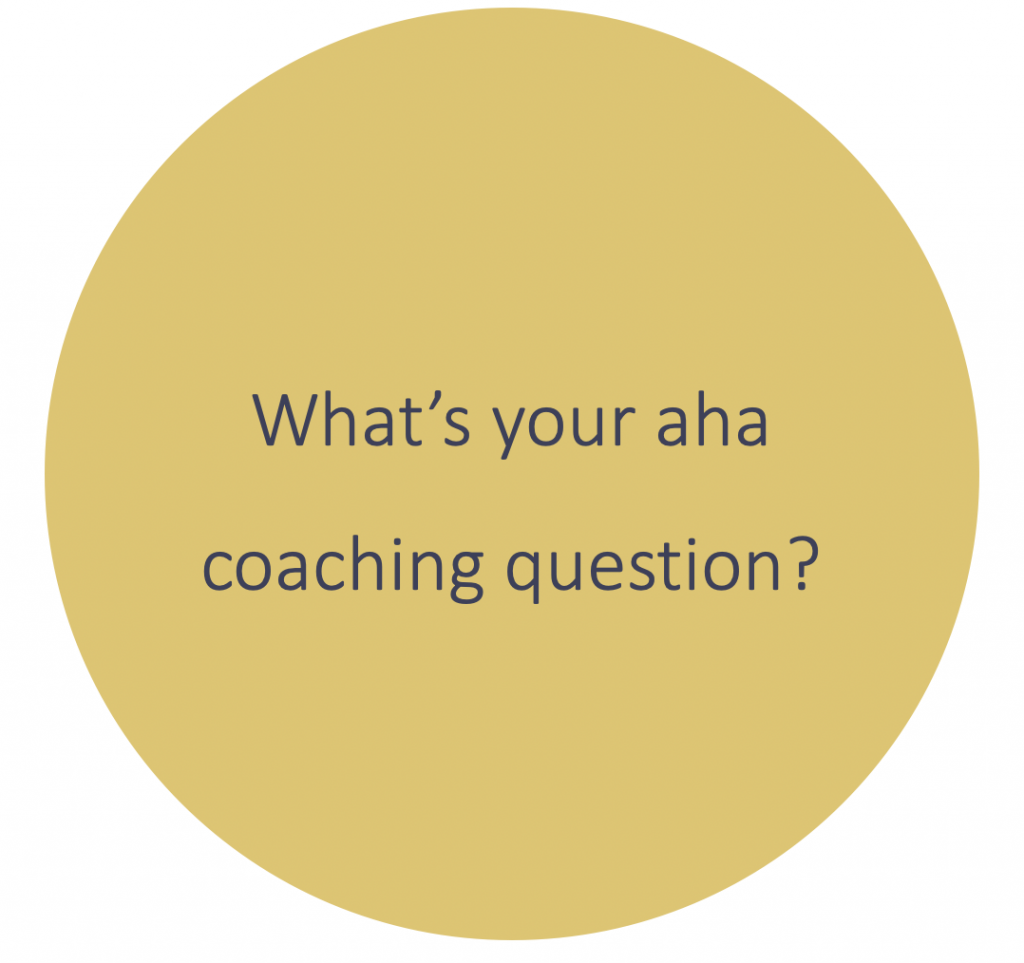 This aha question made me realize that I could grow my resilience even when I felt rock bottom. So if I can do it, you can do it. Anyone can develop their strength. We just need to work on it.

What are the core components for resilience?

We all have a different form of resilience, so I’ll start with mine.

The first one is perception. It’s about the way that we see things and the way that we choose to see something. For example, I see difficulty as a challenge, mistakes as lessons to be learned. But I’ve had to train myself to become like that. Going back to the coaching question that Linley asked me – ‘what opportunities is this giving you?’ – the power of perception, of my perception, is vital here. I look at the challenge. I look at the lessons to be learned because I know that I can choose how I see. If I’m tired, I tend to look at the glass half empty, so I make adjustments to tell myself that the glass is half full. 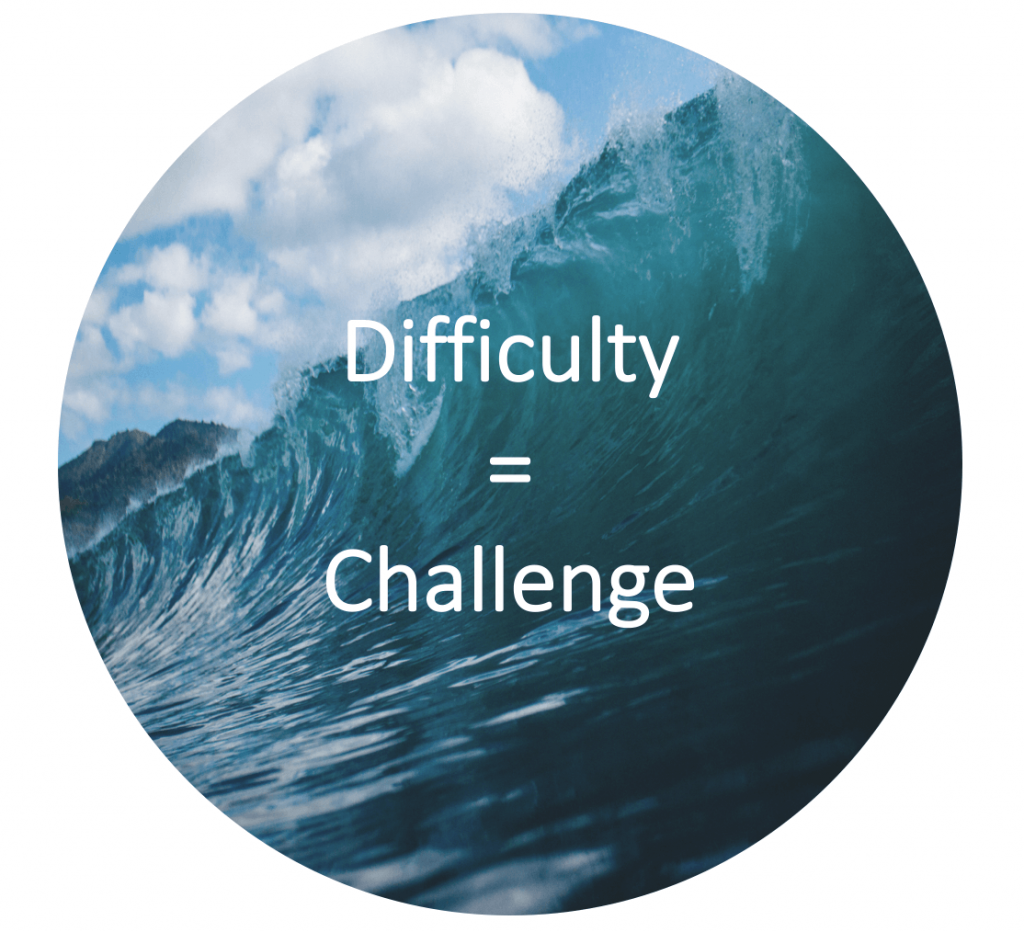 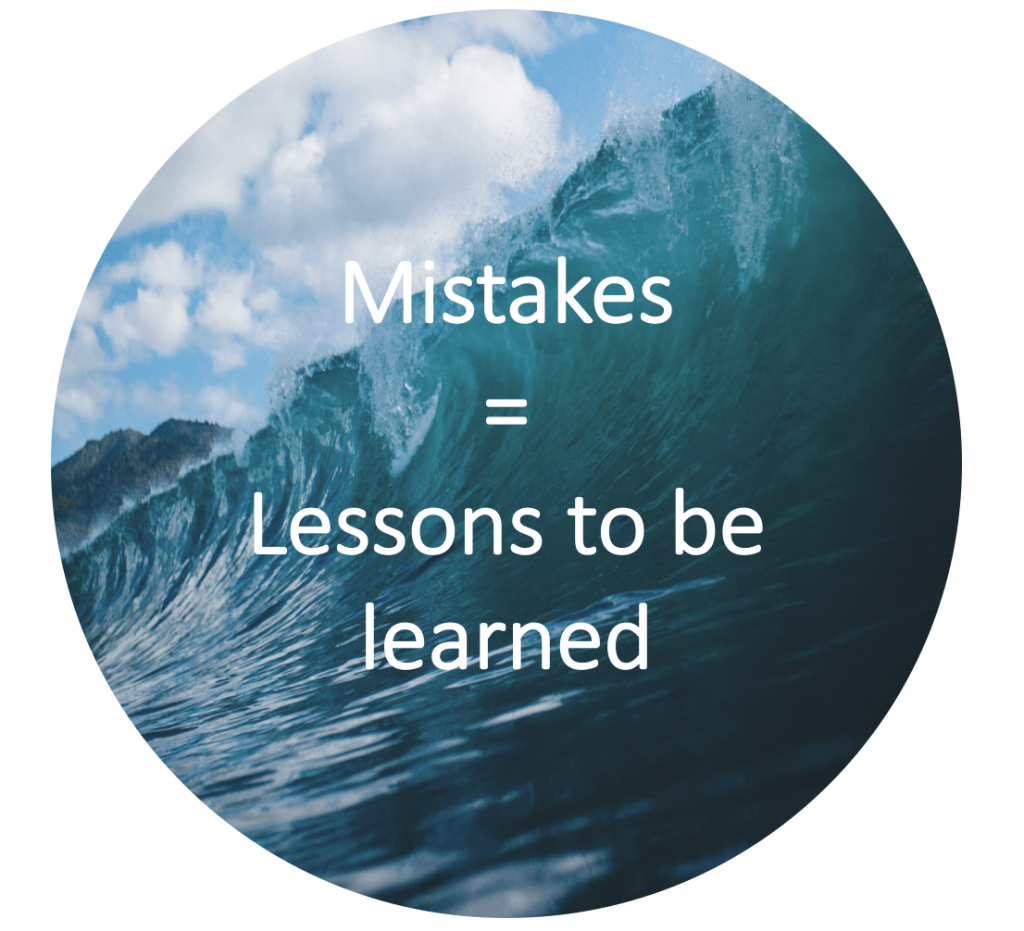 The second one is responsibility. I’m responsible for my actions and my thinking. I’m committed to my goals in my life. I take ownership and responsibility as to how I plan and how I execute the plan.

The third component for my resilience is control. I spend my energy, my time on situations and events that I have control over. This is where I have the most impact. As a result, I feel more empowered, more confident, more fulfilled. This has also been fed by my disruptive leadership style because I always ask myself, is there another way to look at this, can I do better? 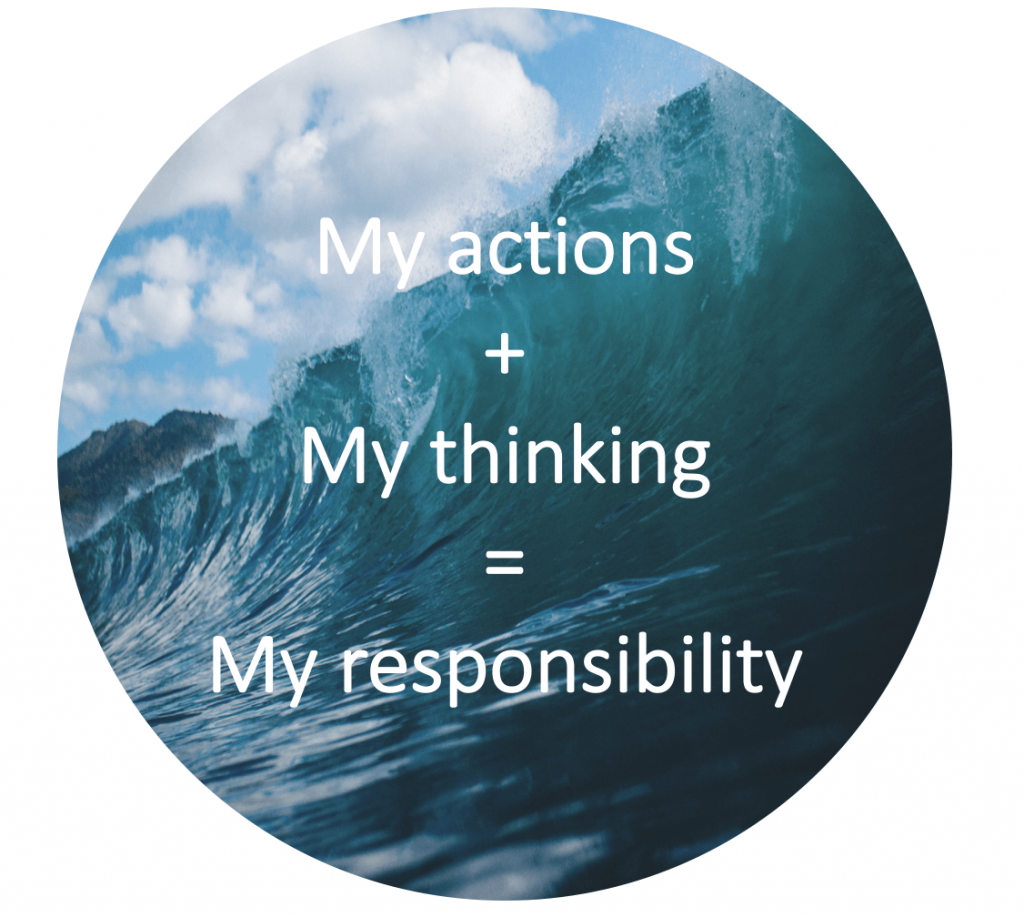 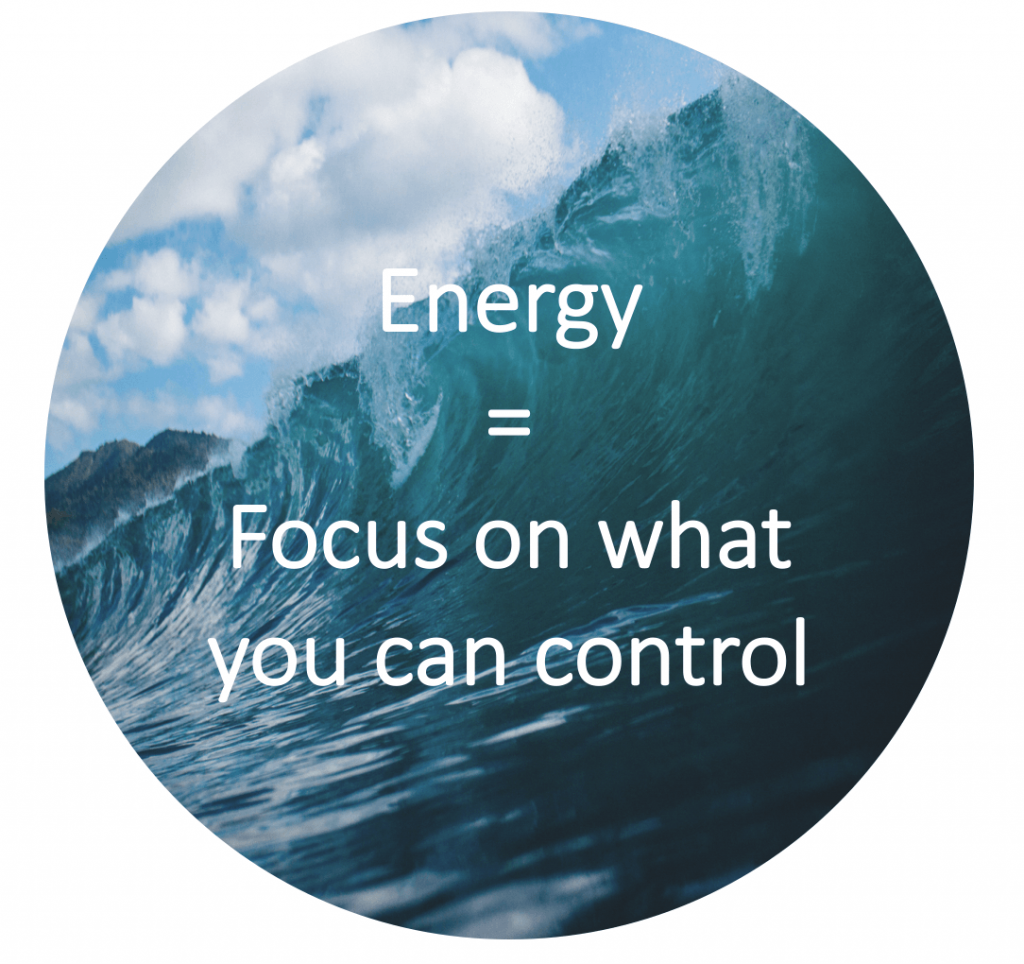 To recap, the three core components for my own resilience are perception, responsibility, and control.  I invite you to think about your own core components, which makes up your resilience. It can take time for you to realize what the components are, but if you stick with it, you’ll end up by seeing a pattern. Knowing what makes up your resilience gives you an advantage because you’ll get to know yourself better so you can adapt your actions to protect your wellbeing and mental health. 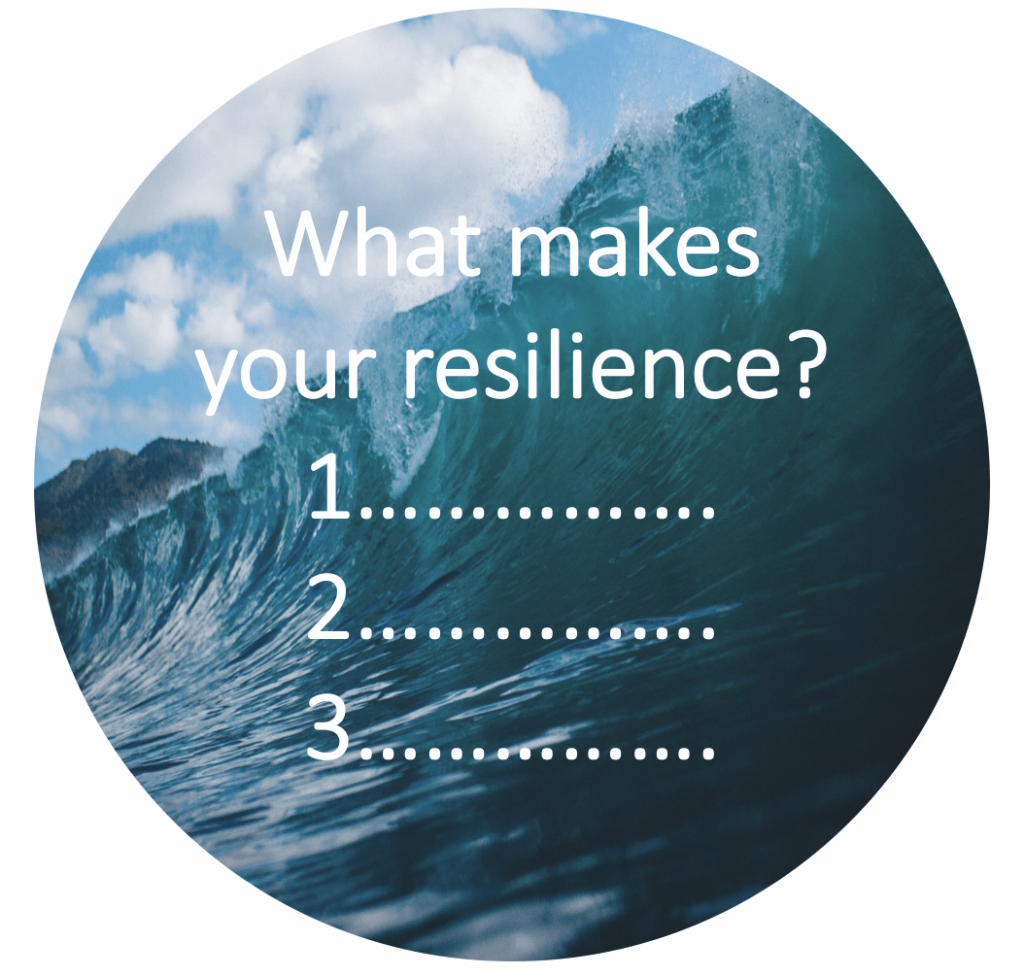 Once you know what your resilience patterns are, you can develop them, work on them on a daily basis and focus healthy daily routines on reflecting how they make you a better resilient leader or manager.

Over the years, I’ve worked on developing the resilience tools that have worked for me. I’m sharing them with you for you so that you can think about whether you want to borrow some, tweak some or decide to develop different ones that work for you. 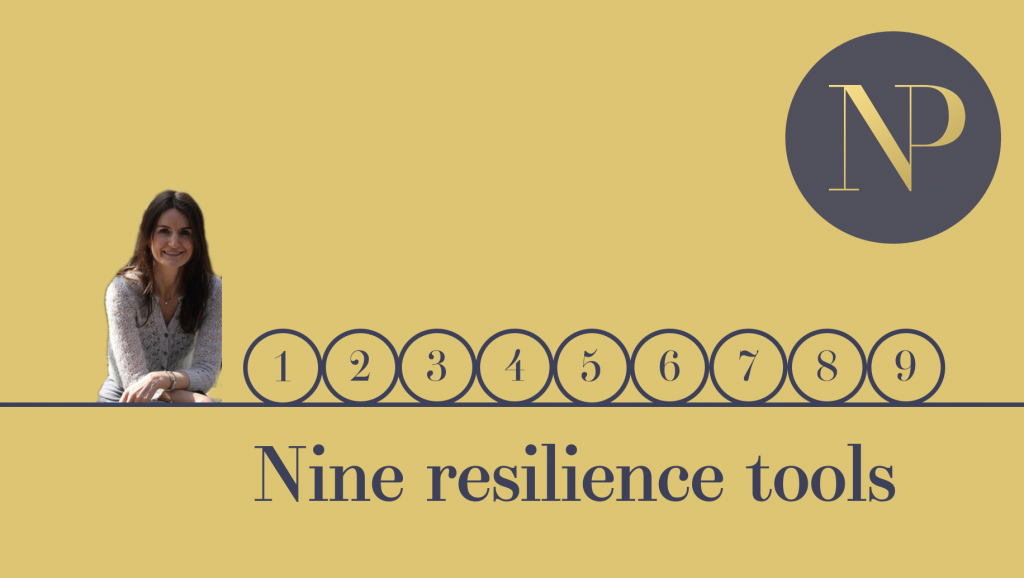 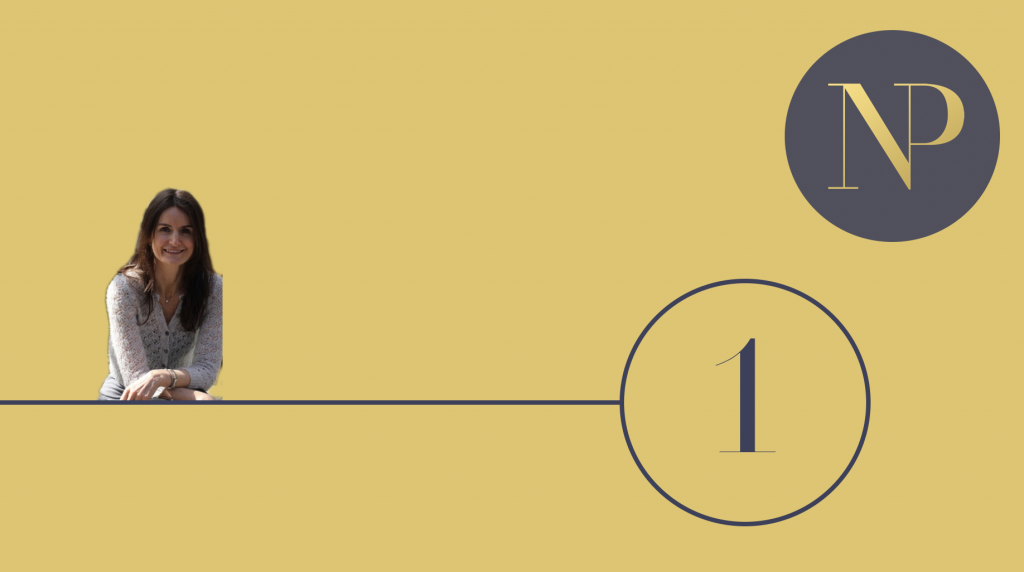 A personal coping mantra can do wonders.

I swap unhelpful negative thoughts for helpful coping thoughts. When I hear bad news, I always tell myself that everything is happening for a good reason, and I move on. I don’t dwell on it, or on the ‘what-ifs. I fully accept what is happening and focus on the future. This requires a certain discipline at first. As you practise it, you get good at it. It becomes organic. 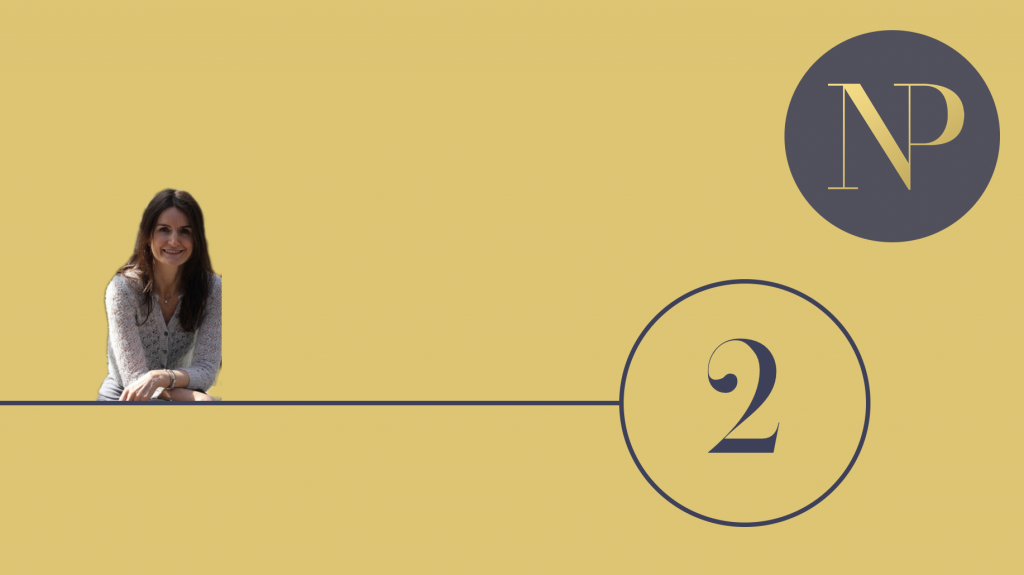 A fixed mindset is when there is a ceiling on what we can achieve. You’re in a box, and you can’t get out of it. A growth mindset is when you see setbacks as an opportunity for learning.

How does this translate in your everyday life? 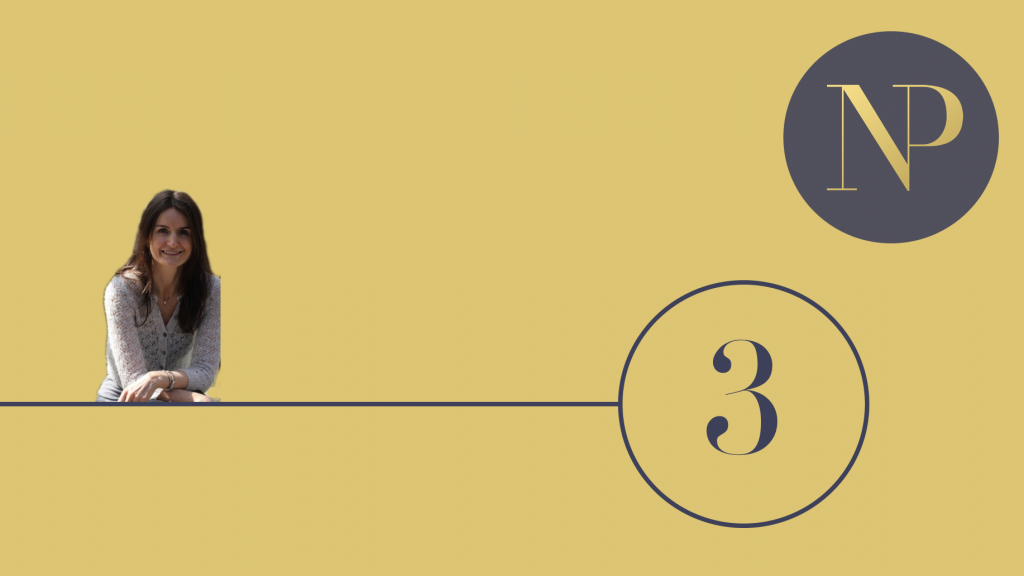 Focus on strengths when faced with a problem. 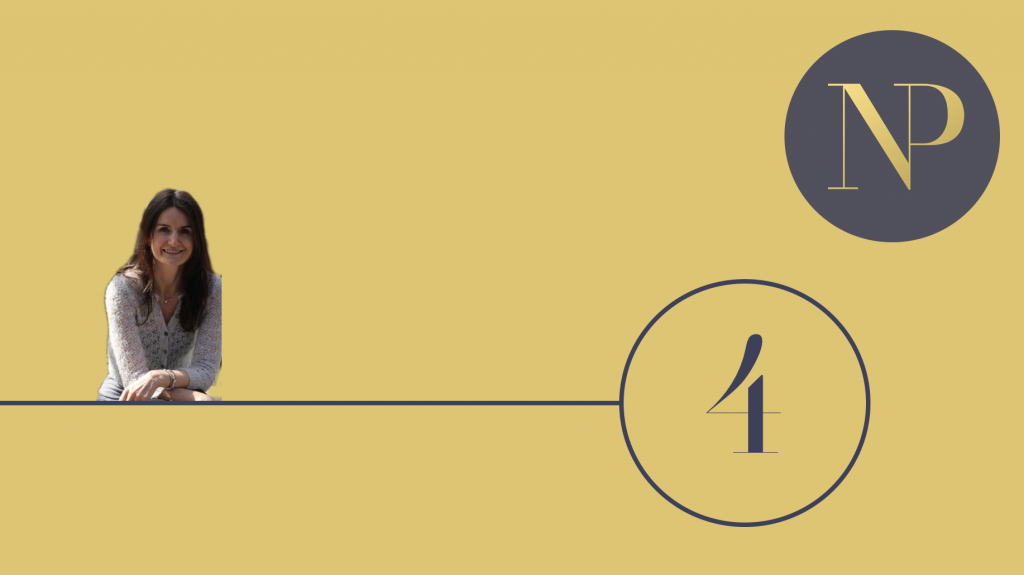 Hope motivates you to find willpower. Willpower will help you achieve your goals, and this will lead to positive emotions. If you don’t like the idea of a hope map or visual board, do a hope journal to create self-awareness every day. Over a period of time, you will identify your hopes, so that you can sharpen them to hone the future. 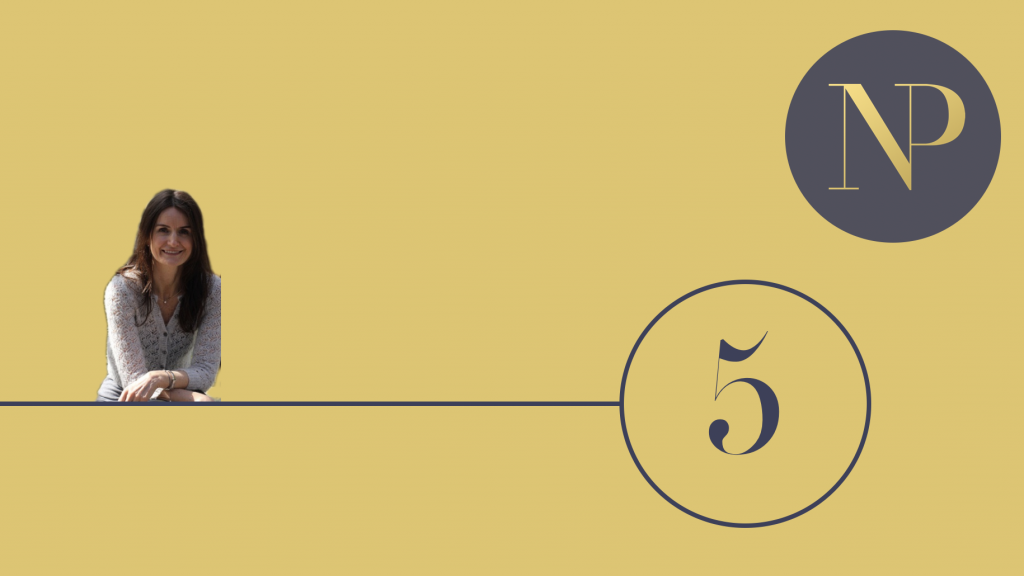 Find inspiration when you are dealing with a challenge.

I tap into my self-care wheel, something designed by Olga Phoenix. The self-care wheel has six dimensions: psychological, emotional, spiritual, personal, professional and physical. Trying to find inspiration in each of those dimensions will help you cope with challenges. If you don’t like the idea of the self-care wheel, try using a visual board, a big piece of paper on which you can draw or attach pictures, quotations, goals and so on. 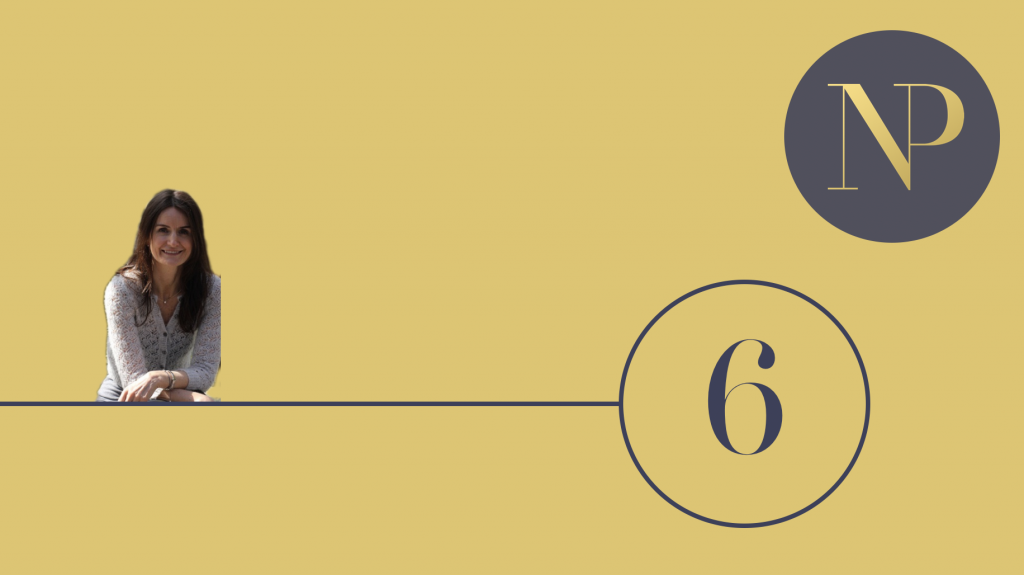 It takes courage to do this because the comfort zone is where you feel safe and in control. Try hopping on and hopping off different zones. Leave the fear zone which is where you’re affected by others’ opinions. Go instead into in your learning zone, where you not only deal with challenges and issues, you also acquire new skills, and you extend the comfort zone, you’re learning something new, you’re learning how to deal with challenges by using new skills. Go to your growth zone, where you find your real purpose, you tap into your dreams, you set new goals, and you realize your aspirations. Decide which of these – the fear zone, the learning zone, the growth zone – could work for you, and how much and how long for to develop your resilience.

Find your safe space outside.

Spend time in nature, or a safe space outside places that make you feel good. For me, partly because it reminds me of my childhood, it’s the sea, so I have it as a screensaver and recordings of waves on my computer, which I listen to during work breaks. The point is to find something that soothes you, that transports you into a more meditative space, where you can re-root and re-source. 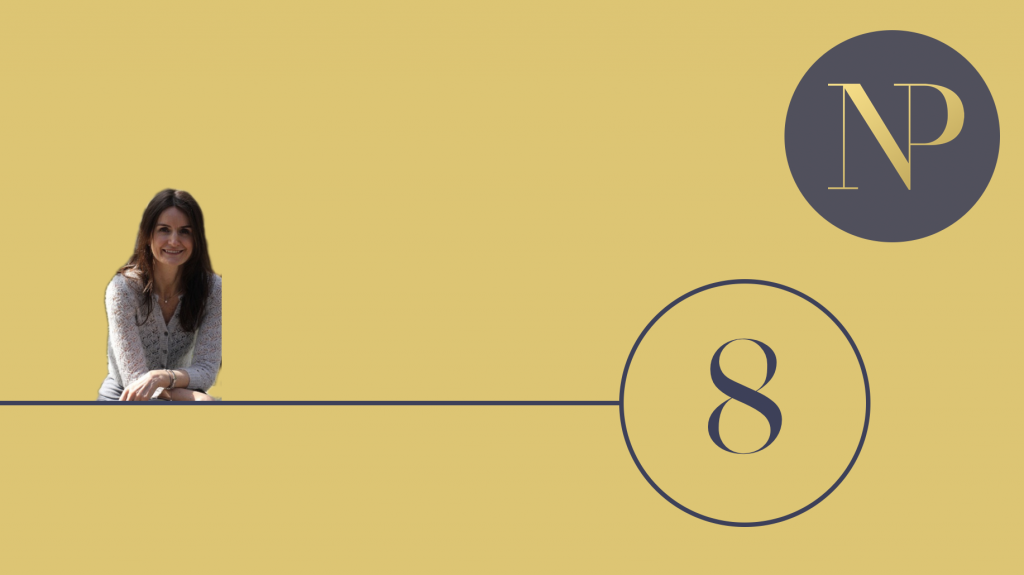 Tap into your optimism.

The most popular metaphor to explain optimism is the glass half full or glass half empty. You’re in pain because you’re going through a complicated process, but you have to stop and acknowledge that the process will take you into a better place. In so doing, you transform pessimism into optimism; you look forward not backward; you find the positives that are always there in any process; you see your journey as a journey from darkness into light. 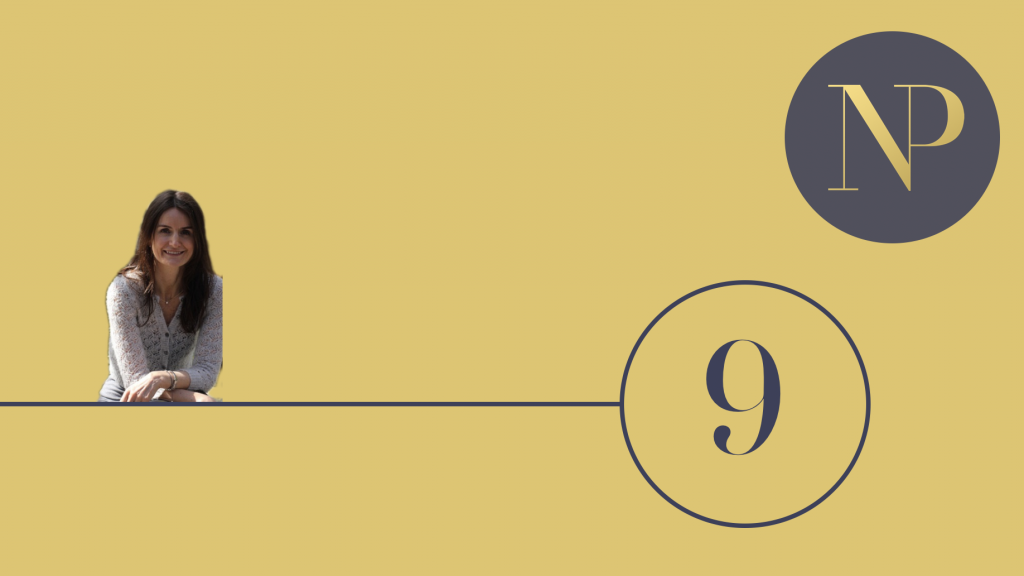 Tolerance is about accepting the reality of a situation because we can’t change it. It’s also about examining your boundaries and your limits. What are you prepared to tolerate and not tolerate? At what point is your tolerance triggering something that is going to unsettle you? Are you happy to compromise? At what point is that making you unwell and unsettled, testing your resilience, slowing you down?

Resilience is About How You Recharge, Not How You Endure

Recharging is about spending more time in the recovery zone as opposed to spending too much time in the performance zone where you overwork because you are burning energy to manage or prevent the conflict, exacerbating exhaustion. The only way to fully recharge and stop is to sleep. Arianna Huffington wrote in her book The Sleep Revolution that ‘We sacrifice sleep in the name of productivity, but ironically our loss of sleep, despite the extra hours we spend at work, adds up to 11 days of lost productivity per year per worker, or about $2,280′. So if you really want to build resilience, you can start by strategically stopping and sleeping. Try these apps: Offtime, Headspace

Conflict prevention and resolution is a process. Resilience is a choice. We can settle for what we know, the familiar, the routine and continue to face adversity and survive the best we can . Or we can become receptive to opportunity for growth and thrive. We can challenge our status quo. We can see what we are capable of. We can reach our highest human potential, and in so doing, become an inspiration to others.

To book in your complimentary discovery call where I can show you how to influence change faster through the power of conversations by transforming conflict into growth, email me.